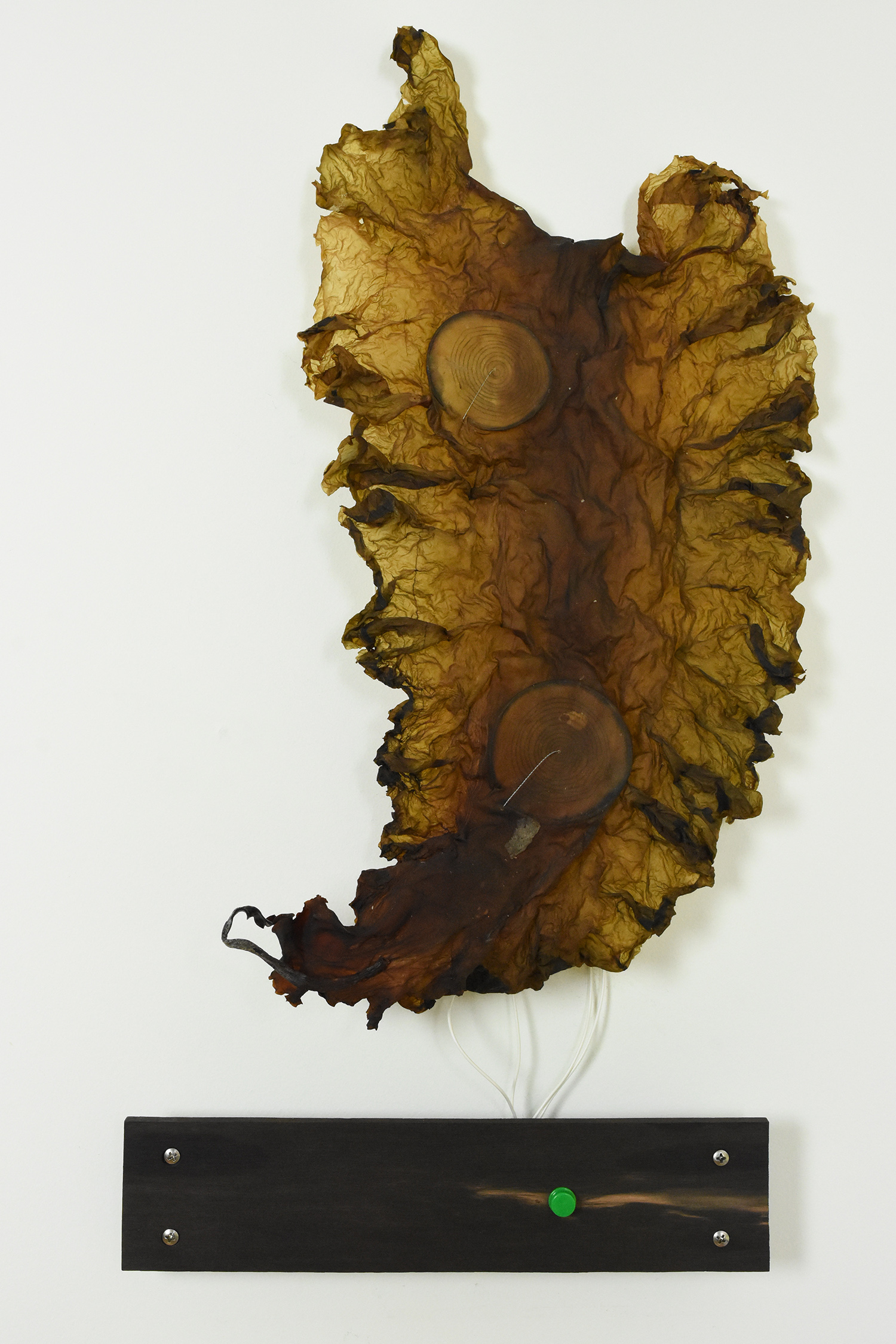 Using sympathetic resonance as a metaphor and as a means of sound propagation, I build sculptures, installations, sound objects, and visual scores that explore the origins of language and challenge the authority of language for making meaning. I am interested in synesthesia and the poetic potential of the decay of language through acts of translation. My current research is about the complex relationships between language and landscape, psychoacoustics, and the subjectivity of place.

Often, my projects begin with site-specific listening walks. I hike to collect field recordings, studying the sounds of natural and manmade landscapes and harvesting plant materials for use in my studio. Most of the materials in this exhibition were harvested from the woods where I live and from Maine’s midcoast and farmlands. ‘Seaweed Remembers the Sounds of the Oceans’ and ‘Maine Farmlands Harvest’ both vibrate with the sounds from their respective ecosystems. Using high-tech and low-tech together, I combine various natural membranes, such as kelp and vegetable papyrus, with compact electronics to make functioning, low-fidelity electronic speakers. 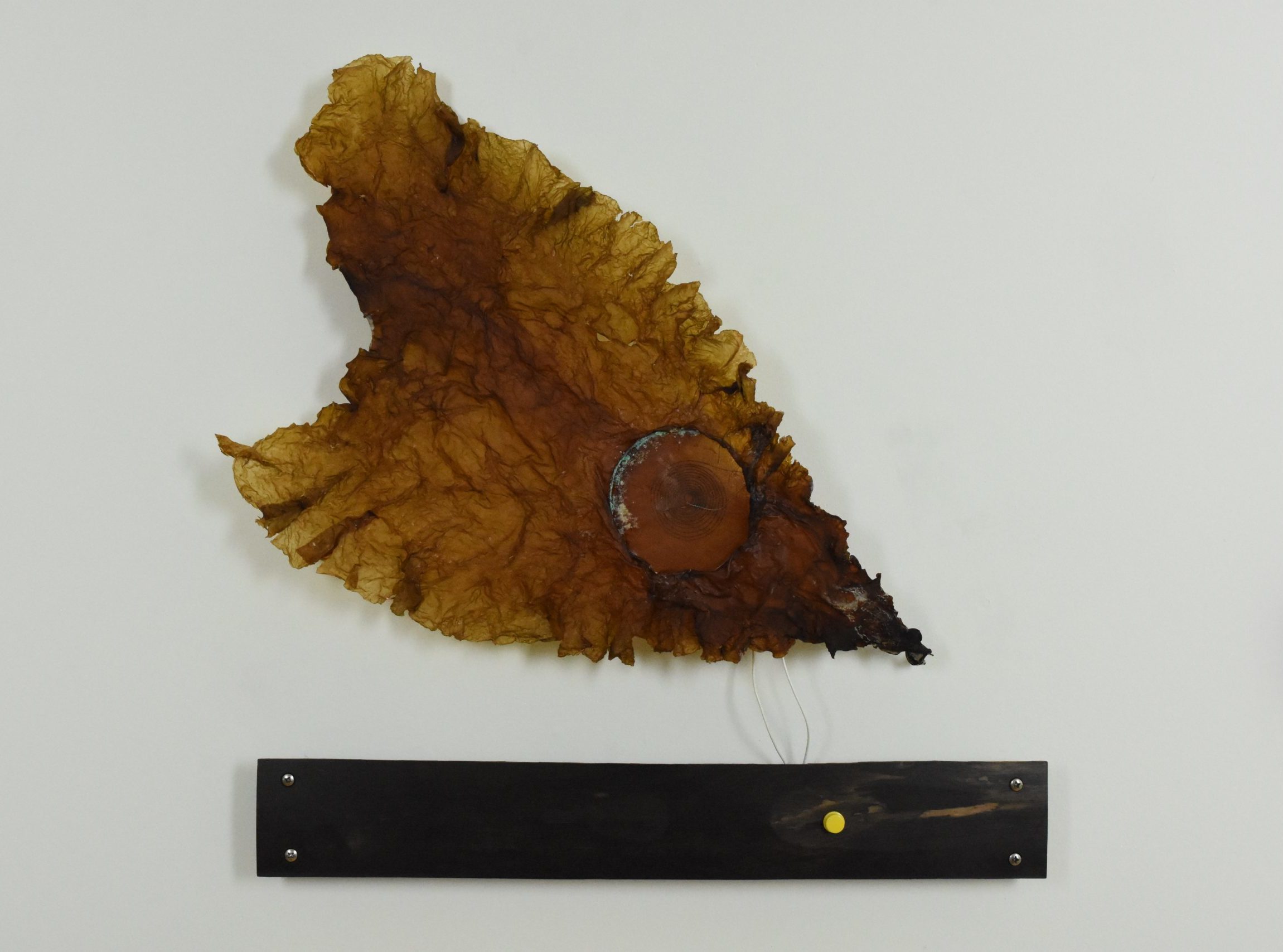 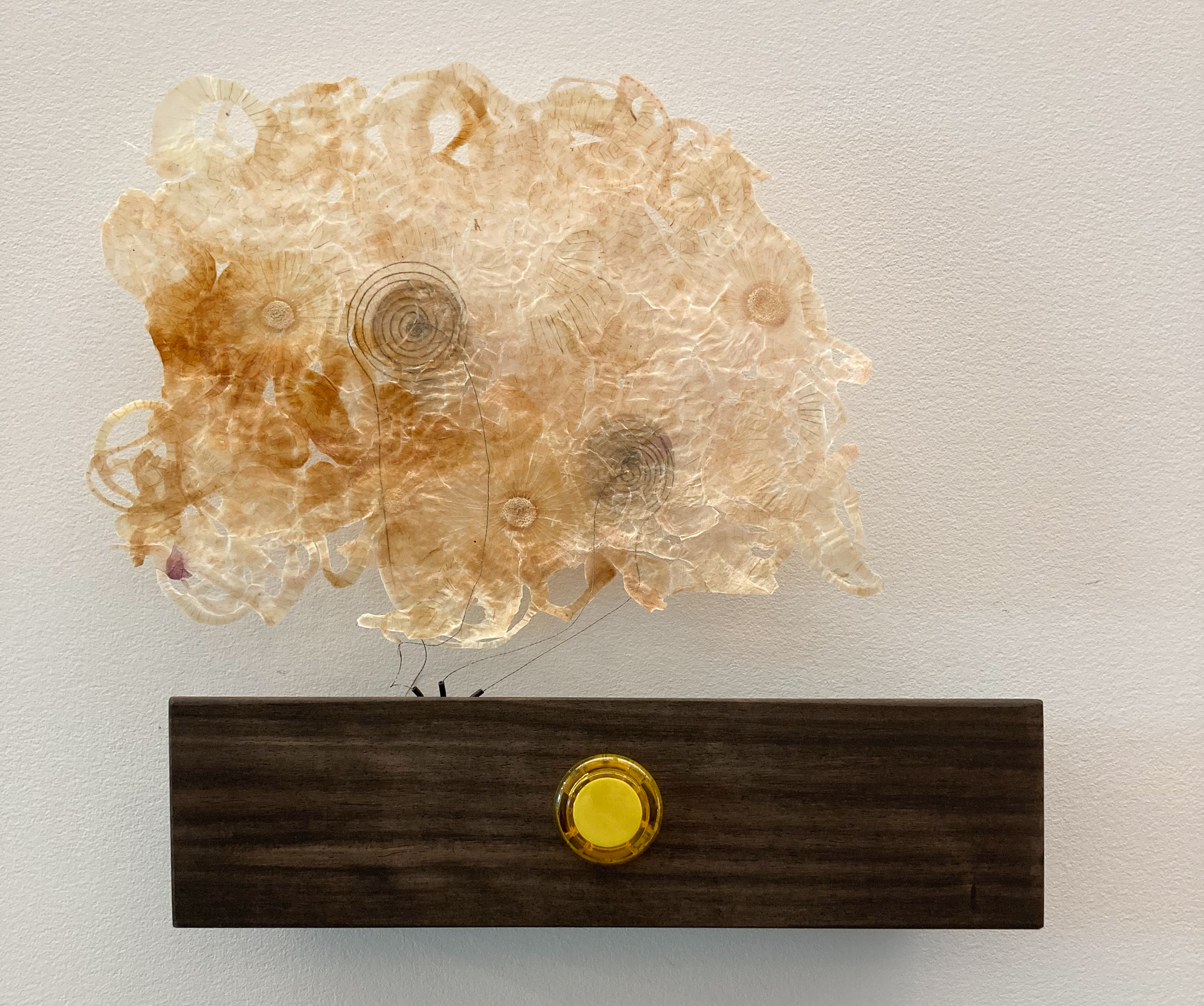 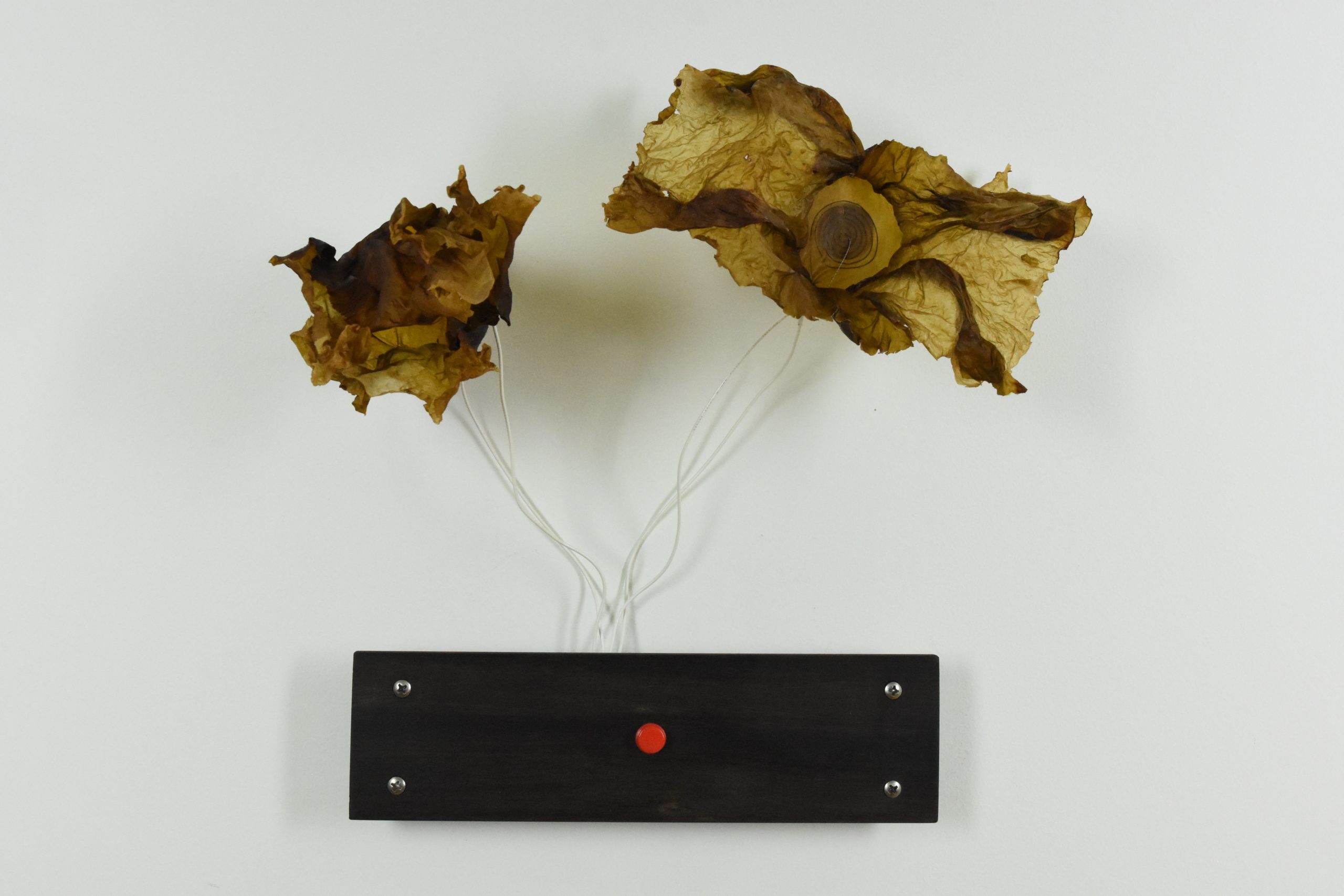 “Seaweed Remembers the Sounds of the Oceans” is a series of wall-mounted sound sculptures that are viewer activated and emit site specific sounds. In building these sculptures I use plant material (kelp) to create audio speakers. As with the Maine Farmlands Harvest series, conductive thread is sewn as a pattern of concentric circles into the kelp and connected to a microcontroller. The kelp then acts as an audio speaker. The prerecorded audio comes from field recordings gathered during exploratory hikes of the coastal regions of Downeast Maine and the Bay of Fundy.

“Maine Farmlands Harvest” is a series of wall-mounted sound sculptures that are viewer activated and emit site specific sounds. In building these sculptures I use fruits and vegetables grown on Maine Farmland Trust Forever Farms to make papyrus that I then craft into audio speakers. A pattern of concentric circles of conductive thread is mounted onto the papyrus and connected to a microcontroller. A small earth magnet is seated on the coil of conductive thread. When a viewer presses the colorful button, an audio signal is sent from the microcontroller via the conductive thread. In response, the magnet vibrates, causing a sympathetic vibration of the membrane of the papyrus, sounding pre-recorded audio that has been stored on the microcontroller. The plant fiber then acts as an audio speaker.

The “Inkling” series of visual scores are handmade books. Symmetrical inkblots, originally made using natural inks, are arranged in visual phrases to align the central fold along the horizon, as a sightline, a timeline, a landscape, a sonogram. I make natural inks from seagrass, kelp, black walnut, acorns, rust, pokeberry, sumac, marigold, goldenrod, blueberry, and the like, all harvested from specific regions in Mid Coastal Maine and the Catskill Mountains. These fugitive inks change quickly when layered, intermixed, or exposed to oxygen. To capture the fleeting alchemy, the visual phrases are scanned and digitally printed using archival inks on Niyodo paper, then folded along vertical intervals to make accordion books. These books are bound in either green, red, or blue book cloth, depending on the region where the ink materials were harvested. “Inklings” bound in green are from Mid Coastal Maine. Those bound in red are from the woods surrounding my home in Woodstock, NY. Those bound in blue are from a broader region of the Catskill Mountains.

The “Tondichtung” and “Tone Poem” series are music stands made in tandem with the “Inkling” scores. The German term “Tondichtung” refers to an orchestral composition that seeks to express extra-musical ideas in music – usually in a single continuous movement that evokes the content of a poem, short story, painting, landscape, or other non-musical source. “Tone Poem” is the English translation of the term. In making the“Inkling” scores, the presentation became a source of inspiration for me to rethink the visual and sculptural function of stands and shelves as integral to the interpretation of sound. Each “Tondichtung” and “Tone Poem” are crafted from trees downed by storms or disease and come from woods at my home or from the homes of friends and family. “A Place I Know” is an installation inspired by night sounds and a gift of lotus leaves. The audio is a field recording from an undisclosed location in Maine, where I spent many pre-dawn hours capturing the sounds of a lake and its inhabitants.

Tracey Cockrell is a transdisciplinary artist who frequently collaborates with other artists, writers, and musicians. Cockrell is faculty in the MFA in Studio Art at Maine College of Art & Design, is a visiting faculty member in sculpture at Bennington College, and teaches at Zea Mays Printmaking.

Learn more about the Artist